This year's trip was different than last year in a few ways. First the snow level was very low this year. The average snow depth was 10 to 12 inches. Some places the ground was bare. Last year there was 4 to 5 feet of snow in the Lamar Valley.

The second thing was the wildlife. Last year wolves were few and far away, and fox were the K-9 of choice. This year the wolves did not disappoint. There was action from a total of five packs. We only saw one fox the whole time, and it was at night. 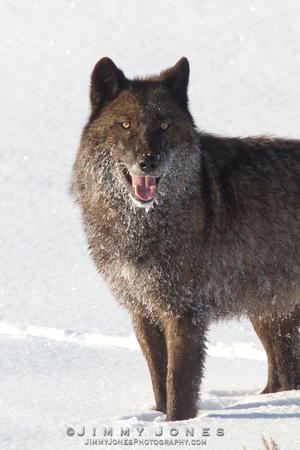 The first week was slow but still had it's moments. The action this week centered around the very large Mollie pack up from the Pelican Valley. This pack has 19 wolves. They almost killed a pup from the Lamar Canyon pack.

Things didn't really get started until the second week. This is the time when the female's estrous is peaking. That usually cranks up the action a few notches, and that's just what happened. The last two wolves in the Agate Creek pack are females, and they were both in estrous looking for males from the Blacktail pack. It's times like this that wolves have only one thing on their mind, mating. This preoccupation lent itself to the wolves getting close enough to get some good shots, and treating everyone to a rare close encounter.

Also in the second week, we had otters and a badger that put on a good show. Not to mention the Canyon pack making three kills in Mamoth in almost as many days. Two of them were very close. That provided the opportunity to get some coyote shots, but I didn't get any shots of wolves on those. However I did get them on the third.

All in all, this was a very good trip. Debbie and I got to see a lot of old friends and made some new ones too!

You can see full size shots from this trip in the "Yellowstone Winter 2012" gallery.

Our next Yellowstone trip will be in May.

Thank you for your comments.

My Winter 2012 trip was this past February. That is the peak of the breeding season
and the wolves are more active during this period.
I hope people will wake up to the irresponsible approach to wildlife management that is taking place.
There are groups and organizations out there that are combating this. If you want more information
on who they are, check out The National Wolfwatcher Coalition.

Thanks again,
Jimmy
Steve(non-registered)
Hi: You are doing some great work, I know how difficult it is getting these shots. These may be one of the last times that wolf packs in the area of Yellowstone will be so easy to photograph, with the new laws in Montana, Idaho and Wyoming making Wolves predators to be shot on site. It will definitely have an effect on the Yellowstone packs. Keep up the good work. Hope to see you out there. Steve
Steve(non-registered)
Hi: Great Wolf photos. Can you tell me when you were in Yellowstone this winter? Thanks
No comments posted.
Loading...