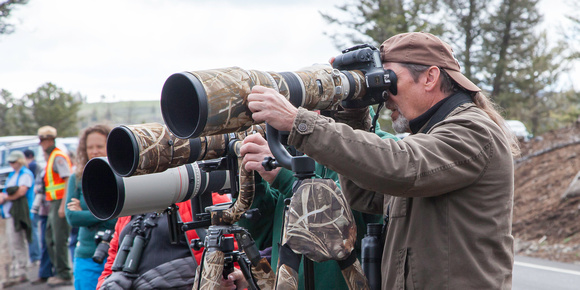 As I mentioned on the home page, I use Canon cameras and lenses.  Arguably

the most important gear in your bag is your lens selection.  I, like many others learned this

lesson the expensive way.  When I started out, I couldn't afford pricey lenses.  So I bought

what I could afford.  Thinking the camera was the hub of my outfit, I bought a camera

and built around it.  The last area of attention was top quality lenses.  Although, cameras have become more important simply

due to the technological advances made since then.

would make lenses my priority and build around them. I'm still in the process of

that will not cease until I stop doing it.

Will update when I get more time with it...

I think this camera is a great step forward.  The ergonomic considerations are vast.  It's obvious the sports and wildlife photographer was the target market when designing this camera. When shooting wildlife, having to change settings on the fly is part of the game. This camera gives you the ability to custom set the rear controls so things like; ISO, focus point, one shot, AI-Servo, and so on, can be changed on the fly without removing your eye from the viewfinder. This, along with ten frames per second, can make the difference between getting the shot and not.

They put some real thought into this camera's setup, and I'm glad they did!

For wildlife photography, getting close is a main concern. That's why the APS-C sensor is my choice for

camera was the most advanced APS-C camera Canon offered.  Not to mention the 1920 x 1080 HD

video capability @ 24p.  Did I mention the eight frames per second, and the nineteen auto focus points,

Being a full frame camera with 21 megapixels, I use this for landscape, portrait, and other uses that

don't demand the telephoto reach of the APS-C sensor. Low noise and beautiful resolution make this

camera an impressive addition  to any camera arsenal. To see some examples from this camera, visit

my Landscapes Gallery, most of the shots were taken with this camera. Since most of my work is wildlife, I don't get as much time with this camera as I do with the 7D MKII, but when I do, I'm allways pleasantly surprised and impressed all over again just how nice this camera performs.

I have owned every model in the 10 series line up, except for the 60D, and I intend to keep this camera.

I bagged one of my favorite and most challanging shots with this camera, a Golden Eagle on an elk

At 15 megapixels, it should have good utility for some time to come.

This camera is what I started digital with.  Camera technology has evolved at a rapid pace, and

this was my hub that quickly became obsolete.  I still have it because it's worth more to  me than I could

This is my main workhorse for wildlife.  I usually run the 1.4x tele. on it. With  this setup it maintains

auto focus and is tack sharp.  This lens is large and white, so to tone it down, and also add some

protection, I have it dressed in Realtree Max 4 Camo by LensCoat. When needed, I also use the Rain

I can't say enough about the image stabilizer on this lens.  It's nothing short of amazing!  I used to have

the non-stabilized original version of this lens and used a Bushhawk shoulder mount with it.  This lens

however is so stable handheld, I no longer do.  When the IS comes in, the view simply stops moving,

period!  The first time I used it, my response was an audible, "wow"!  When I'm shooting wildlife I

normaly have a 2x tele. on it.  Being that it's an f/2.8, it maintains auto focus. The Golden Eagle shot

mentioned in the 50D review was also taken with this lens handheld.  Since then I have taken

shots at dusk of  two Great Horned Owls  at 1/80th of a second, also handheld with the 2x

tele.! Perhaps the best example to date of the IS performance is some shots of Honey Bees I took handheld with

an extension tube installed. This lens mounted to a 7D MK II, is my companion

setup in the field when I'm shooting with the 500mm.  Due to the impressive IS, I have removed the tripod

collar and always shoot handheld with this lens.

This lens is for the 5D, since the Tamron 17-50 is not designed for a full frame camera. When I get some

time on it, along with the 5D, I'll report my impressions.

This lens is also for the 5D. I will report my impressions when I get some time on it.

about it, but when I saw the results this lens gives you I was impressed.  This was the first lens I

purchased that put me on the road to quality lenses.  Even though it is not an expensive lens it performs

beyond it's price tag.  At the time, I had no Canon "L" glass to compare with, but when I got the first 70-

I had the non stabilized version of this lens and was very happy with it, so I  didn't hesitate when the VC

version came out.  I use this lens for landscape. Both of these Tamron lenses have surpassed my

This head deserves a mention!  I use this head for the 500mm setup, and when I do, the only limitation

is me.  If you've read about this head then you've heard about how effortlessly you can swing

around a big setup.  Well I'm here to tell you, it's all true!  The main factor in getting my Raptors in

flight shots, is this head!