I wasn't going to post about the killing of the '06 Female, since half my posts are about wolves dying.

However I felt compelled to write this in light of recent events...

In February of 2009, on one of many trips to Yellowstone to photograph wolves, I had a very rare opportunity to photograph a gray wolf under unique circumstances.  Shortly afterwards I would learn this wolf was the '06 Female. "'06" for the year she was born.

She was sleeping on top of a hill in Elk Creek just west of the Petrified Tree road.  At the time my buddy Dave Collins and I thought she just happen to be there resting, so we photographed her for about two hours.  When she would raise her head or move, we would grab some shots.  Eventually she rolled over, stretched, and got up.  She had looked at us many times in those two hours, and knew we were there.  What she did next was unexpected.  She started walking down the hill toward us!  We were on an adjacent hill by the Petrified Tree road with a gully

between and were shooting the entire time.  When she got to the base of the hill, she was on ski tracks left by cross country skiers.  The tracks ran laterally in front of us from right to left in the bottom of the gully.  At this point she started to walk along these tracks all the while looking in our direction.  First she walked right to left and when we thought she was going to keep going and leave she turned around and walked left to right again in front of us.  This was like shooting a model on a runway!  All the time still looking toward us...  As if this wasn't good

enough, she then left the ski tracks and was coming straight at us.  This seemed strange because we were in plain sight and she had been looking right at us!  We were the only people there.  She appeared to be looking for something and was getting closer to the base of the hill we were on.  If she came any closer we would lose sight of her, (we were set back from the edge).  Just then I saw something in front of her that looked like it might be the edge of a large rock.  My 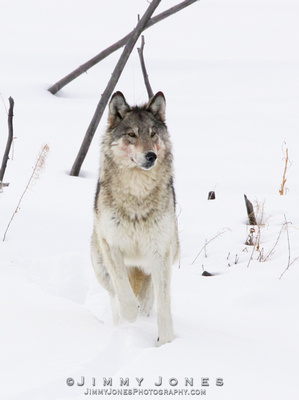 carcass she was about to open.  She was the only wolf around and still had blood on her fur from taking down this elk on her own.  This was the first documented account of a skill that would become part of her legacy.  I was able to get more shots of her than all my other wolf shots combined.  This was also only the first or second

day of our trip!  I could have gone home right then a happy man!  This had been my first encounter with her.  At the time I didn't know there would be more to come...

By this time the famous Druid Peak pack was in bad shape and all but disbanded.  The alpha female was dead and the alpha male had dispersed due to the fact the only females left in the pack were his daughters.  Two male wolves, 755m and his brother 754m who had joined the pack after the alpha male left were trying to mate with the remaining females who were in poor health with severe mange.  The '06 Female was once again out on her own and was trying to lure these males away from the Druid females.  This had been going on for weeks before I arrived.  The males would keep going back and forth between the Druid females, and the '06 Female.  During this time, she was the only wolf that was making any kills.  One of the Druid females (Thin Female) was attacked by the Blacktail pack when she was trying to feed from a kill they had been feeding on.  She was found dead the next morning.  I helped drag her body from Bob's Knob to the Slough entrance parking lot.  Yet another Druid was found dead later in the week.  The Druids would not last much longer.  In that same week, an elk carcass was discovered in the Lamar Canyon.  It was up on the north side.  This was an '06 Female kill.  The two Druid males who had been with the remaining Druids the day before were now with her and they returned to the kill in the evening.  When they did, they came from the top of the canyon and appeared on a rock between two trees. I had joked that all we

needed was for them to come back to the kill and show up on top of that rock and howl in unison...  They didn't howl, but they did show up on that rock!  I had spent eight hours in eight degrees photographing the many visitors to that kill before the wolves showed up.  When they did, it was the icing on the day long cake.  This would also be the day the two males would decide to stay with the '06 Female and go on to form the Lamar Canyon Pack, and I happened to be there to witness it.  Again, I got another photo session with this very special wolf...  Just days before, I had taken a candid shot of her watching wolfwatchers, who were watching the Druid females.  By this time she had developed quite a following, and to me, like many others, she was my 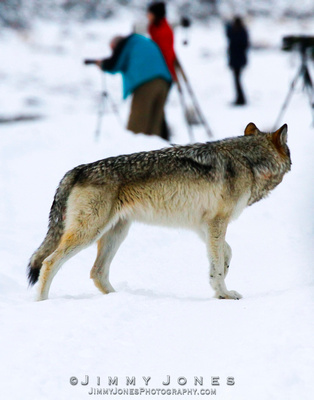 favorite.  I felt a special connection with her.  I still had more shots of her than any other wolf.

For almost three years after that, she would go on to become the "Reigning Queen Of The Wolfwatching World", mother three litters of pups, and I would get more shots of her.  With her leadership the Lamar Canyon pack would take over The American Serengeti and wolfwatchers from around the globe would come to Yellowstone to spend money and time just to get a glimpse of her.  That would all come to an end on 12/06/12, when she was legally shot dead outside the park.

When she was killed I received multiple calls from around the globe for interviews, among them was a call  from Nate Schweber of The New York Times.  Of all the people who have photographed and watched her, I was being interviewed about her being shot.  This  was another chapter in her life that somehow I had been pulled into.  When I told Nate "She is the most famous wolf in the world", I didn't know the impact that would have in bringing attention to the tragic way she died.  At the time of her death, I also happend to have a half page photo of her published in the then current issue of American Scientist Magazine.  It was the one of her standing on the rock between the two trees.  It may have been the only photograph of her in a periodical at that time.  Ever since I first photographed her in Elk Creek I have felt a special bond with her.  Not that she knew I existed,... but from my end.

Since her death, the National Wolfwatcher Coalition has released a commemorative sweatshirt for a fundraising effort in her name.

Renowned guitarist John Sheldon wrote a tribute piece "Wolf 06" in her memory and has partnered with me to share it with all those who loved this wolf.  Even as I write this, I have a youtube tribute project being released with singer, songwriter, musician, Matt Stone, titled "Spirit of The Wolf" that has stemmed from this connection to her. In addition, photographs from both aforementioned encounters have been published by National Geographic Television and National Geographic Children's Books.

In 2017, Crown Publishing Group, a division of Penguin Random House LLC, New York, released a New York Times best selling book about the true life story of the '06 Female entitled; "American Wolf: A True Story of Survival and Obsession in the West", by Nate Blakeslee. This book is based largely on years of daily field observation notes taken by Laurie Lyman. This release has no photographs.

In 2020, Penguin Random House Publishing Gmbh, Germany released the German language edition entitled "Die Wolfin", meaning, "She Wolf".  I was blessed to have the cover shot and fourteen additional exclusive photos in the book! 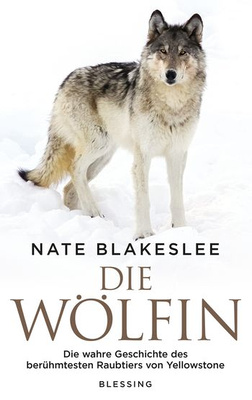 When I look back on the unique opportunities I have had with her... to be interviewed when she was killed, to have played a part in letting people know she was indeed "The Most Famous Wolf in The World", and to have the cover shot along with others in the book about her life, I can't help but to think my favor with her was "Uncanny".

Click "Here" to view my gallery dedicated to her memory.

setss teacher requirements in New york(non-registered)
Brilliant story, very interesting I liked because it is real.
Susan Jacobs(non-registered)
Thank you for sharing this beautiful, courageous, intelligent wolf with all of us. You are so fortunate to have had (and continue to have) such a connection with her. Thank you for sharing her legacy. This will hopefully help people understand that wolves should be respected and allowed to live.
Vicki Santello(non-registered)
Thanks for this well written article and congratulations on your images being recognized for such well regarded publications. What a privileged sighting you had and what a journey you experienced with '06 in the years that followed!
Joyce Wycoff(non-registered)
Having looked at your tribute to 06 yesterday, today I'm reading Rick Lamplugh's four-part history of human/wolf interaction and was struck by his discussion of "leaps of friendship." It sounds like 06 was one of those remarkable animals who could make that leap and your description of your interaction with her was an example of one of those leaps. What an experience ... thanks for sharing!
SILVIA REYES(non-registered)
Bellísimas imágenes de ese animalito precioso!! Una pena su final. Lamentablemente el humano sigue haciendo daño. Ruego que no vuelva a pasar.
No comments posted.
Loading...